Cinnamon Roll Blondies are blondies with a layer of cinnamon-sugar mixture in the middle and topped with whipped cream cheese frosting. If these bars make you crave a cinnamon roll, try my homemade Cinnamon Rolls.

It starts with my blondies recipe, but I didn’t add butterscotch chips to the batter. Instead, I made a layered blondie with the batter on the bottom and top with a cinnamon-sugar mixture in the middle.  Then, I topped the bars with a homemade whipped cream cheese topping. It’s like a cinnamon roll in a bar form. To be more specific, it’s like eating the center of the cinnamon roll, the best part, that is loaded with cinnamon!

There are three parts to this recipe–the blondies, cinnamon layer, and whipped cream cheese frosting.

Brown Sugar: You will notice that brown sugar is the only sugar used in these blondies (no granulated sugar). This gives the bars a great rich flavor. We preferred light brown sugar over dark brown sugar in this recipe.

Cornstarch: The cornstarch helps the bars have a light and chewy texture.

Cinnamon-Sugar Mixture: The buttery cinnamon and sugar mixture is the middle layer of the bars. As I stated above, it’s like getting to the center of a cinnamon roll in every bite!

Frosting: The whipped cream cheese frosting is the perfect complement to these bars.

How to Make Blondies

You will want to first make the bars since they have to cool before adding the frosting. To make the blondies, first, combine the melted butter and brown sugar in a large bowl. Stir well before adding the eggs and egg yolk, one at a time, mixing it all together. Next, add the vanilla.

Meanwhile, in a medium bowl, whisk together the flour, cornstarch (the ingredient that helps the bars from getting too dry), baking powder, and salt. Stir the dry mixture into the butter and egg mixture until completely combined. If the batter is getting too thick, you can always use a hand mixer.

Add half of the batter to a prepared 9×9-inch baking dish, spreading it out evenly. Before adding the second layer of batter, make the cinnamon sugar layer. 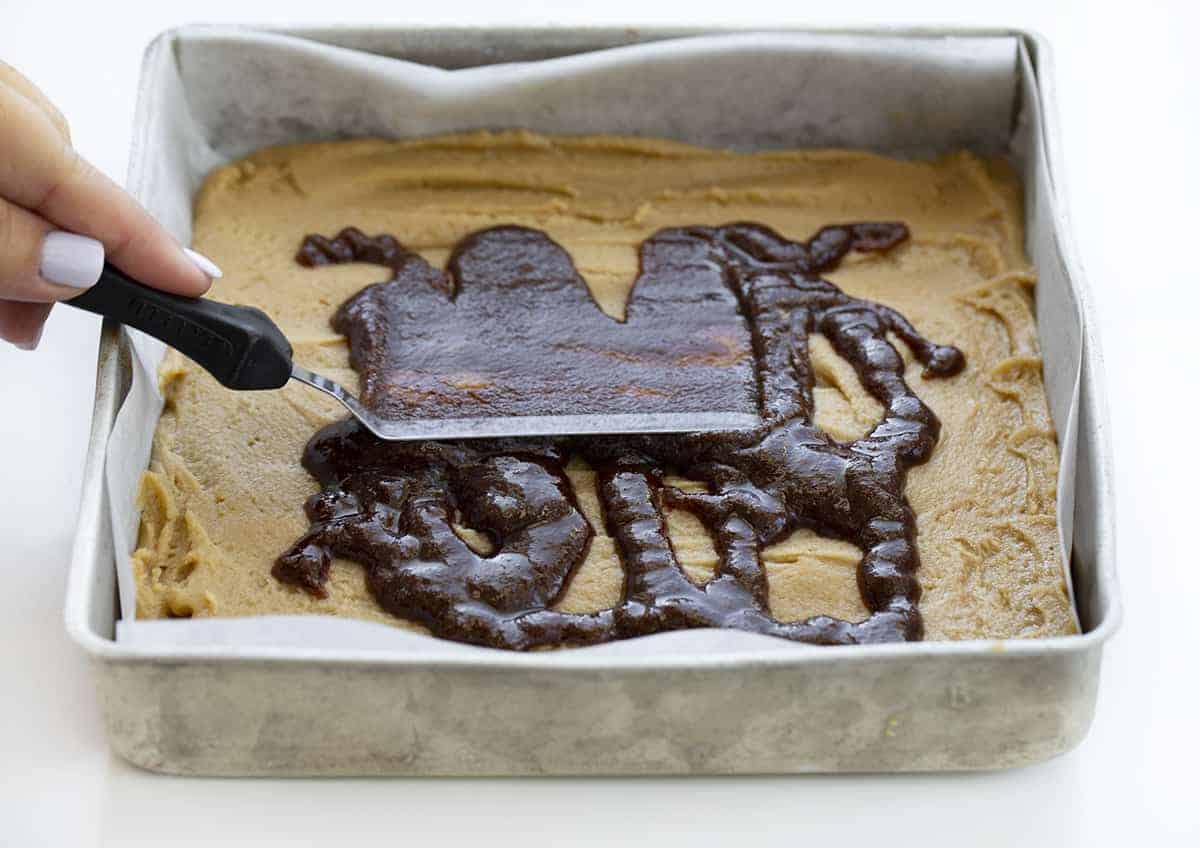 How to Make Cinnamon Roll Mixture

Bake the Cinnamon Roll Blondies for 35-38 minutes, or until the edges begin to turn golden brown. Remove the blondies from the oven and let them cool completely before adding the whipped cream cheese frosting. 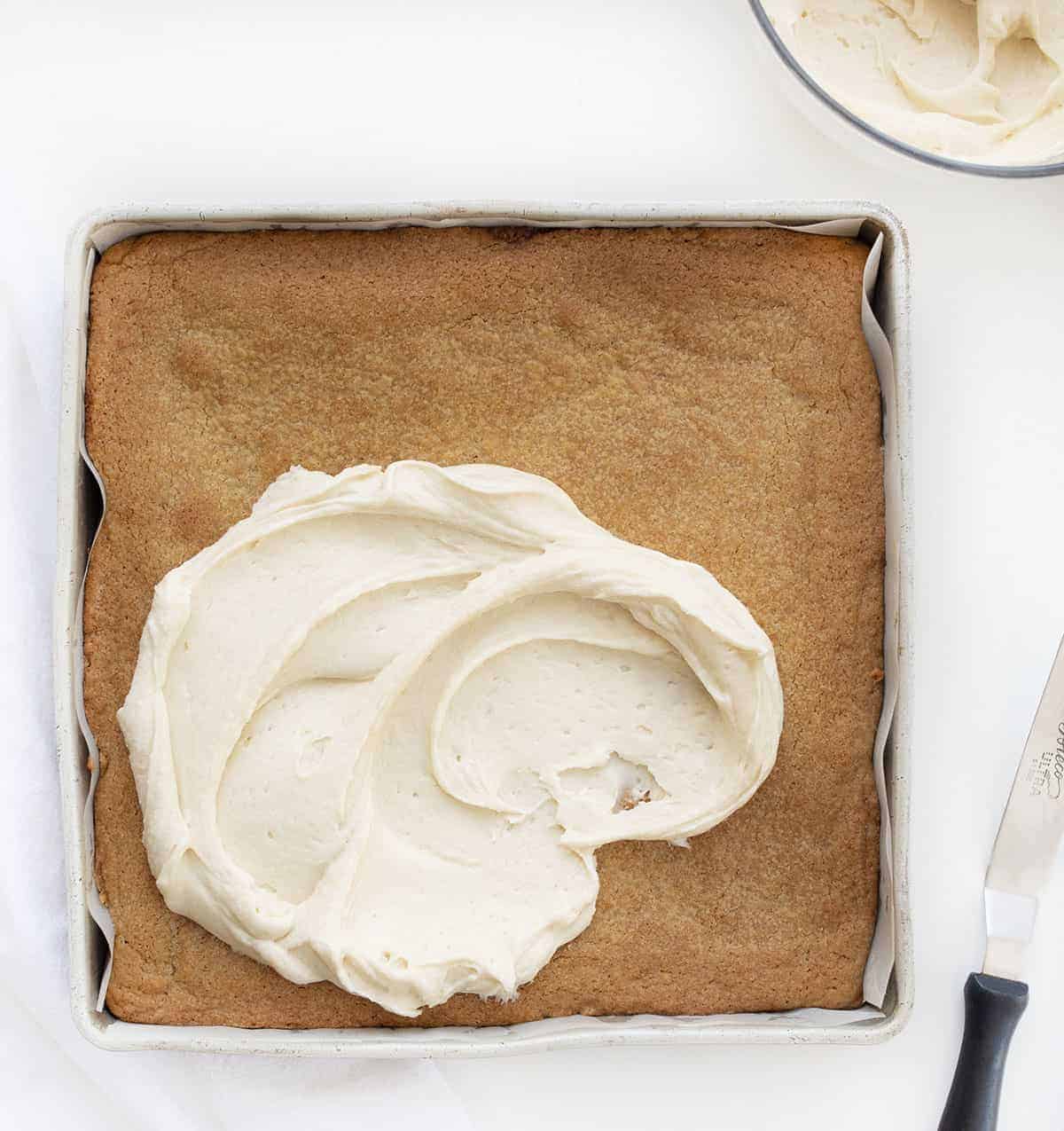 It only takes a few minutes to whip together this cream cheese frosting for the Cinnamon Roll Blondies. So, once the bars have cooled completely, put the cream cheese, butter, confectioners’ sugar, vanilla, and salt in the bowl of your stand mixer. Using the paddle attachment, start on low to get all the ingredients combined.

Then, mix on high for 4-5 minutes, or until the frosting is light and fluffy. Finally, frost the cooled blondies, cut, and serve. This would definitely be a dessert bar you could serve for breakfast or as a dessert. Store the blondies in a sealed container at room temperature for up to 3 days.

Can I Freeze Cinnamon Roll Blondies?

Yes, you can freeze these bars. However, I recommend freezing them without the frosting. The frosting is easy enough to whip up when ready to serve the blondies. To freeze them, let them cool completely. Then, store them in a freezer-safe container for up to a month. Let them thaw at room temperature. 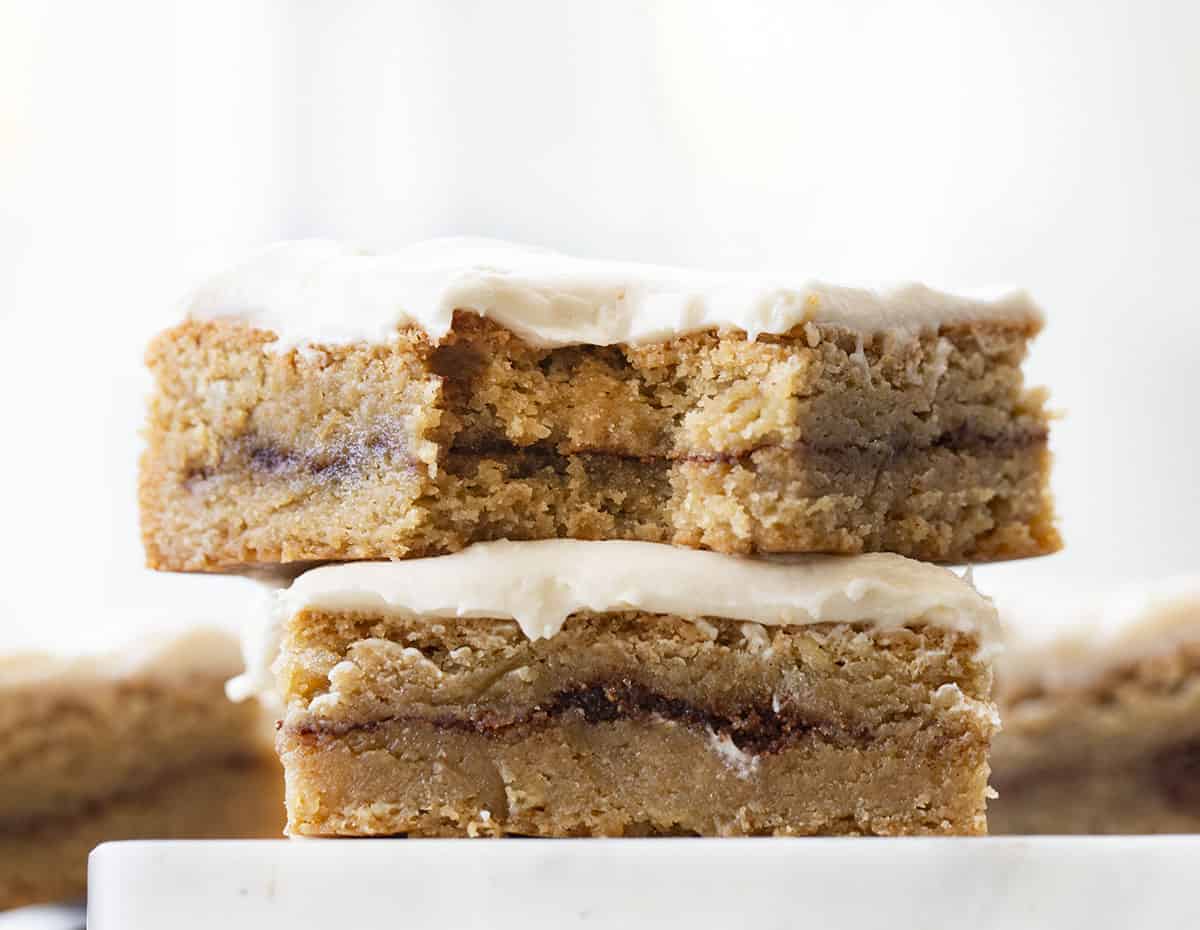 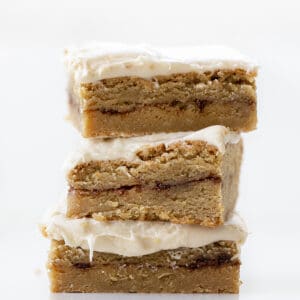 Cinnamon Roll Blondies are blondies with a layer of cinnamon-sugar mixture in the middle and topped with whipped cream cheese frosting.

Amanda Rettke is the creator of I Am Baker, and the bestselling author of Surprise Inside Cakes: Amazing Cakes for Every Occasion – With a Little Something Extra Inside.Over the course of her 15+ year blogging adventure, she has been featured in and collaborated with the Food Network, New York Times, LA Times, Country Living Magazine, People Magazine, Epicurious, Brides, Romantic Homes, life:beautiful, Publishers Weekly, The Daily Mail, Star Tribune, The Globe and Mail, DailyCandy, YumSugar, The Knot, The Kitchn, and Parade, to name a few.

View all posts by Amanda Rettke