Here’s the perfect recipe for the sardine-shy: Take fresh, boneless sardine fillets. Coat with a bold Italian breadcrumb crust flavoured with lemon, garlic, herbs, capers and pecorino cheese. Now just flash fry in a hot pan until crispy. It’s an explosion of flavour and texture that’s cooked in 2 1/2 minutes flat, making it one of the fastest fish recipes around!

Sardines are one of the most underrated fish around. They are rich in flavour, cheap and good for you (they’re packed with heart-healthy omega 3’s). They’re also a fast-breeding and sustainably fished species.

Many cultures revere the humble sardine, especially when pulled sparkling fresh from the sea. In Sicily, Italians love to roll up sardines stuffed with breadcrumbs, garlic, herbs and a little tangy hard cheese, then bake them or throw them on a hot barbecue.

It’s this southern Italian take on sardines that we’re drawing inspiration from today. The flavours of Sicily – lemon, pine nuts, chilli, garlic, herbs, pecorino and olive oil – are a winning match for the robust flavour of sardines!

This recipe is an excellent one for the sardine-wary or first-timers because:

This is a really quick sardine recipe with big Italian flavours that’s great for sardine first-timers.

Sardines for this recipe

As mentioned above, we’re using pre filleted sardines in this recipe. The guts and bones are removed, and the sardines come butterflied, as shown below.

They can be purchased from fish mongers fresh and sometimes packaged at fresh produce stores such as Harris Farm in Sydney (packet below).

Filleting your own is not particularly difficult but it’s a little fiddly to do well. So I will be mighty impressed if you do! Leave a comment below to brag! 😂

If they come vacuum-packed (as pictured below), they can have a shelf life of a couple of weeks. Fresh sardines that aren’t packaged however have a short shelf life, like all oily fish. Use preferably the same day you buy them or at the latest the next day.

Other fish that can be used

This recipe works beautifully with both oily and non-oily fish. The fillets just need to be fairly small and thin with a flat flesh surface. This makes it suitable for the crust to adhere and for the fish to cook through before the crust burns. Other fish that can be used for this recipe as written include:

Use your judgement for quantity – enough for 2 people. Also the cook time will need to be adjusted slightly for the thickness of the fillet you use.

Ingredients for the Italian Crust and Topping

Here’s what you need for the flavour-loaded crust! There’s quite a few substitution options, so don’t be concerned if you don’t have everything.

How to make Italian Crusted Sardines

There’s a bit of mincing and grating to get the crunchy crumb coating prepared (and boy is it worth it!). But the actual assembling and cooking part is super quick. 2 1/2 minutes on the stove!

What to serve with Italian Sardines

To make this into an instant meal, serve on toast or – for even better crunch factor – crostini. I like to use the thin baguettes and slice on an angle to make long crostini. Brush with oil, sprinkle with salt, bake until crispy. The the magic finishing touch – lightly rub with the cut face of a raw garlic clove. Also the secret Italians use for amazing Bruschetta!

As for some fresh greens, a big, fat, juicy Greek Salad would be absolutely on theme here, as would an Italian Panzanella or a Tomato Salad with Olive Tapenade. Here are a few more suggestions:

And if you’re ever feeling indecisive, you know you always have our ultimate fall back – The Great Garden Salad! – Nagi x 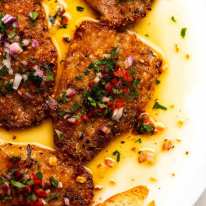 Recipe video above. Here’s the perfect recipe for the sardine-shy: coat filleted sardines with an assertive Italian crust flavoured with lemon, garlic, herbs, capers and pecorino, then pan fry until crispy. It’s an explosion of flavour and texture cooked in 2 1/2 minutes flat, making it one of the fastest fish recipes around!Excellent recipe for the sardine wary or first timers – no bones to worry about, and the intense Mediterranean flavours balance out any concerns about the fishy flavour of sardines.

1. Sardines – For ease of use, quick cooking and to avoid the question of whether to eat or not to eat the bones (I eat them!), I’ve opted for sardine fillets here ie. butterflied open, bones removed. They are sold in packets at fish stores and at Harris Farms here in Sydney.
Size – Sardines differ in size, I’ve used small ones. If you have larger, just use less sardines.
Other fish that can be used for this recipe as written include – bream, flounder, herring, blue mackerel, river trout. They need to be fairly thin fish with a flat surface suitable for the crust to adhere. Use your judgement for quantity – enough for 2 people. Also the cook time will need to be adjusted for the thickness of the fillet you use.
2. Panko breadcrumbs – Japanese breadcrumb favoured for the extra-crispy coating it gives crumbed foods. You can buy at most big supermarkets (Coles, Woolworths) in the Asian foods section and good grocers. Substitute with regular breadcrumbs if you can’t find it.
3. Pine nuts – An idea swiped from Italian sardine dishes, because it just works so well with sardines.
To toast – Preheat a small skillet with no oil over medium heat. Add pine nuts and cook, shaking the pan regularly, until it’s kissed with golden and it smells nutty. Remove from skillet immediately, let cool slightly then finely chop.
Substitute with – almonds, macadamias or pecans.
4. Anchovies – Adds depth of flavour and salt (but so much more flavour than just plain salt!). Does not make the crumb taste fishy, it just adds great savoury flavour. Substitute with 3/4 teaspoon of anchovy paste.
5. Capers – Can substitute with finely chopped gherkins or even green olives, for a similar flavour effect.
6. Crust – Sardines are pretty small and thin, so we don’t want to overwhelm with too much crust. Whatever adheres by pressing the sardines into the breadcrumbs is all we need (without oil or egg + flour for dredging).
7. Nutrition per serving, assuming all the oil is consumed. I thoroughly encourage you to mop the plate clean with bread!

Rate him out of 10 for cuteness!